We installed a MHC 2D-LC 18 months ago and have found it valuable in a broad range of applications. This article covers how we use the system in our analytical troubleshooting laboratory and how it can be applied to solve key tasks in the lab.

TWO-DIMENSIONAL liquid chromatography (2D-LC) offers additional selectivity compared to conventional HPLC and is therefore of particular interest for complex samples. In practice, a 2D-LC system consists of two HPLCs, the first dimension (1D) and the second dimension (2D). The two dimensions are connected by a valve and loop system. 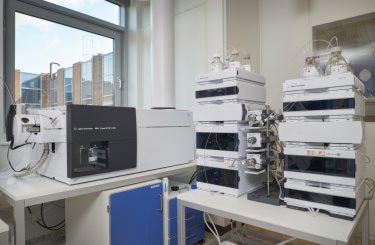 There are two different types of 2D-LC: comprehensive and heart-cutting. In comprehensive 2D-LC, the entire 1D is cut into small sections and analysed in the 2D within the run-time of the 1D method. This setup gives additional selectivity over the entire 1D chromatogram, but the 2D run time is limited to the sampling time in the 1D. To avoid loss of separation already obtained in the 1D, fast sampling times are required and very fast ‘D methods are implicitly required.1

The increased resolution of MHC 20-LC has been used to separate specific analytes from sample matrix or other compounds to characterise those further and to enable quantification of low-level impurities by 2D-LC-UV2 or 2D-LC coupled to mass spectrometry.3,4,5 The resolution has also been used to investigate main peak purity in order to evaluate the specificity of a method.6 The combination of an achiral 1D method with a ultrafast chiral reverse phase (RP) method in the 2D has also been described for MHC 2D-LC.7

When analysing biopharmaceuticals, chromatographic systems requiring MS incompatible buffers or very high salt concentrations are often needed. The 2D of a MHC 2D-LC has been used in these cases as an easy method to remove the analytes from the highly water-soluble buffer and salts needed for the 1D separation, and thereby obtaining MS compatible methods for biopharmaceuticals.8,9,10 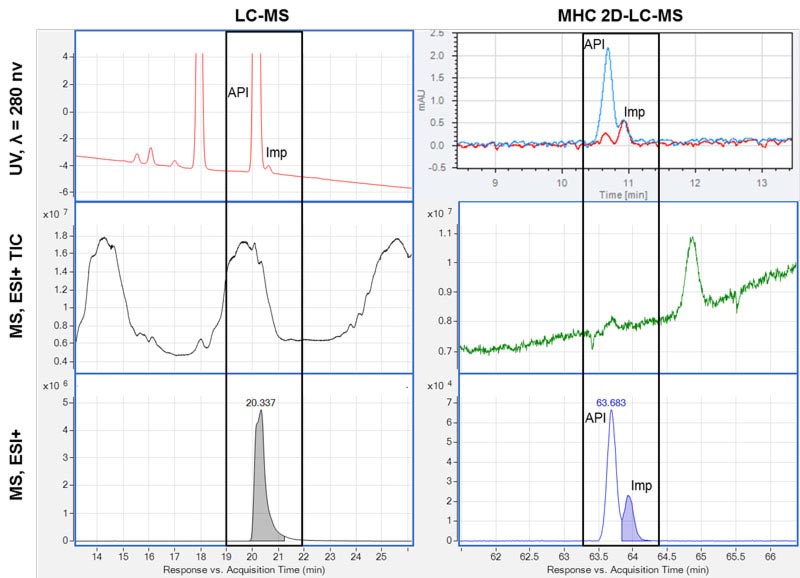 Recently, a paper was published addressing the issue of validating MHC 2D-LC methods for future use in a GMP laboratory environment. The authors conclude that areas other than hardware capabilities and validation needs must be considered. For instance, more user-friendly software is required before MHC 2D-LC is likely to become a routine application suited for regulated environments.11

One of the recurring tasks in our laboratory at LEO Pharma is identification of unknown impurities. We are most often presented with a sample and a HPLC-UV chromatogram, in which a small unidentified peak is observed and we need to increase our knowledge about the peak. Our first step is almost always to run an LC-MS experiment using the same or similar chromatographic setup suitable for MS detection, which was used when the peak was first observed. In many cases this works like a charm and we can generate a formula for the impurity and sometimes structural information based on fragmentation pattern.

However, in other cases MS detection is not directly possible or does not result in useful data. In these cases 2D-LC coupled to MS can be a fast and elegant way forward.

Impurities in the presence of severe interference

A new impurity of 0.1 % was observed in a topical drug product, eluting on the tail of the peak from the active pharmaceutical ingredient (API). The impurity was barely separated from the API peak in the UV chromatogram, and the UV spectrum from the impurity was different from the API. It was not possible to significantly improve the 1D separation between the impurity and the API.

When MS detection was added, significant tailing of the API MS signal was observed due to saturation of the MS. In addition, massive signals from the excipients in the drug product were observed over a large part of the chromatogram. Chromatograms illustrating this troublesome case are presented in Figure 2

An MHC 2D-LC-MS experiment was chosen to avoid saturation of the MS caused by the API and the excipients by heart-cutting of the impurity for additional 2D chromatographic separation to obtain a cleaner mass spectrum.

Impurities in the presence of non-volatile components 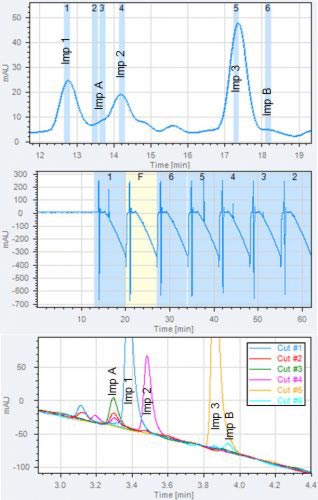 In this case, two unidentified impurities (imp A and B) were observed in a drug product analysis, with levels just below the acceptable limits. The method for analysis of the drug product included a phosphate buffer. The method was very sensitive to mobile phase modifications and had several other impurities eluting close by imp A and B.

We therefore went straight to a 2D-LC-MS setup using the following stepwise approach (chromatograms are shown in Figure 3):

By using this setup we were able to obtain high-quality MS spectra. From the recorded accurate mass data and isotopic pattern, the formulas of the unknown impurities were identified. They were both isomers of known impurities eluting in the same part of the chromatogram.

During drug development and the lifecycle of a product, chromatographic methods are improved and in some cases entirely new methods are developed. In these cases, there is a need to ensure and demonstrate the specificity of the new methods.

When a new method is developed, we need to establish the retention time of the relevant impurities. However, there may be several obstacles: standards of impurities not available in pure form; MS is of limited value due to many isomeric impurities or MS incompatible buffers; UV spectra of limited use due to similarity between compounds.

The 2D-LC setup at LEO Pharma

Equipment: We use an Agilent 1290 Infinity 2D-LC system with multiple heart-cutting. The system has two column ovens and two photodiode array (PDA) detectors. When MS is required we add an Agilent 6550 QTOF to the outlet of the 2D PDA.

1D LC setup: The first dimension (1D) setup is maintained as close to the setup used when the problem/impurity was originally observed. We often downsize the column to one with 2mm ID and adjust the flow accordingly.

Heart-cutting: We have twelve 40µL loops in the valve systems, allowing multiple cuts across the 1D. We use time-based or peak-based cutting as appropriate.

2D-LC setup: The second dimension (2D) column, temperature, and mobile phases are selected based on the problem at hand (eg, best possible resolution, ‘most orthogonal’, or removal of buffer). To balance the effects of a large injection volume (40µL) and being able to use MS without splitting the flow, we use columns with 3mm ID and a flow of 500µL/min in 2D.

In order to determine how the peaks correspond to each other in the two methods, we use a 2D-LC experiment: In 1D we set up the old method and in 2D we set up the new method. Using multiple heart-cutting, each peak of interest from 1D is sampled and analysed in 2D. This way we establish the retention time of each peak of interest in the new method without the need for standard material or MS detection, even for minor impurities.

During method development and validation there is a question that keeps popping up: are we sure that the main peak is pure? This is of course a relevant question, as we are in the business of ensuring the quality of our drug products and ultimately the safety for our customers. We need to demonstrate the API peak does not conceal any unknown impurities from either degradation or synthesis. What options do we have for this task? 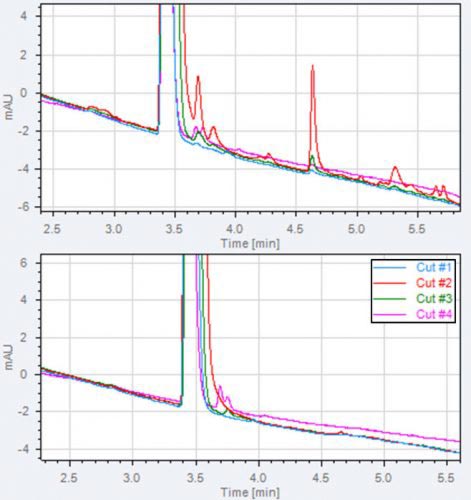 How about 2D-LC? This application was originally one of the key drivers for us to enter the 2D-LC arena. The greatest advantage was that we could maintain the original separation of impurities and the main peak and just focus on any impurities detected below the main peak by the second dimension.

Each sample is analysed using each of the methods above in the 2D. Three or more heart-cuts are taken across the main peak to ensure the entire peak is sampled. Any peaks observed in the second dimension are compared to the relevant threshold applicable to the API or drug product. Examination of main peak purity works out for some API, but has been more challenging for others due to the occurrence of ‘artefacts’.

We have experienced ‘artefacts’ formed during the three seconds passage of the 1D UV detector. These artefacts are seen in the 2D chromatograms and can be recognised as peaks eluting in multiple heart-cuts taken across the entire main peak.
This phenomenon is presented in Figure 4A. The main peak purity without UV detection in 1D can be used for light sensitive compounds. Figure 4B shows the presence of two genuine impurities coeluting with the main peak in the
1D method. A detection limit below 0.05% was obtained here.

We have experienced degradation in 1D UV for several API giving rise to artefacts in the 2D in the range 0.1% to 1.5% area percentage. When we do 2D-LC main peak evaluations, we keep in mind that genuine impurity peaks must be present: when the 1D UV lamp is switched off; when the heart-cut is analysed instantly, since in-loop degradation is also possible.

LARS DENCKER NIELSEN is worked with analytical development and troubleshooting in the field of chromatographic separations and mass spectrometry for small molecules within pharmaceutical research and development for more than 17 years, and had earlier worked with environmental and pesticides analyses in the same field for another five years.

NAJA WESSEL JACOBSEN works with chromatography, mass spectrometry and NMR to support chemical synthesis, formulation development and production with analytical expertise in order to identify impurities, develop methods and characterise excipients. Since completing her PhD in 2011, she has worked with analytical chemistry in R&D at LEO Pharma.